I publicly declared that 2015 doesn’t feel any different

Sent this tweet when I had a life changing realization: Wow. All this time I didn’t believe flash drives worked in Apple computers but they do. I’ve been doing things the hard way for many years

I drank a lot of coffee 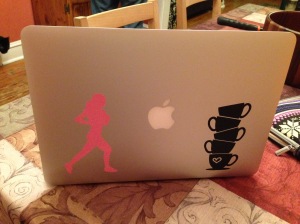 I went to breakfast with my friend specifically to get red velvet waffles and the waffle iron was broken. This was a sad sad day…

I tried to figure out if I was a real blogger since I bought the domain name for my blog, I am still pondering this

Ninja was sad that Phil and I both had work again. He meowed and said winter break was over. When I got home he did this….

I ran on the treadmill while doing laundry so that the dryer would warm up the basement!!

Wore a pink satin sparkly soul headband and a warm winter scarf! Basically, this made the day go perfectly

Sent this tweet when I got home from work: Humming christmas songs when I get home from work is now a habit and no longer a seasonal norm. Still humming…..🎄⛄️🎅

and then this tweet: I almost fell off my treadmill bc I’m a klutz but I ran 5 miles yesterday & today so that’s a step in the right direction

I found a new hero at work. A mother told her college aged daughter to be responsible and I really enjoyed this because the daughter was irresponsible

Someone came to my job and said Susan told him we could help him but I don’t work with anyone named Susan….

I was petting my kittens and then they put a sleepy spell on me, I got tired, took this photo, and eventually fell asleep

Woke up and sent this tweet: You know it’s cold when you have been wearing under armor to bed all week