In 2012 Phil’s job was hosting a 5k so I signed up and raced. It was the very end of August and it was dreadfully hot outside.

This race was pretty low key and I won by a decent amount over the next woman.  After the race, I was interviewed for the newspaper and these photos ran online and in print with the article the next day. Yes, this was cool but the next day at work all I heard about was how I was half naked on the front page of the newspaper. My coworkers know I run because I coach and I often go to or from a running function before and/or after work but never do I ever walk around work like this. It was just an awkward day…..

Now I do my best not to end up on the front page of the newspaper that we get delivered to my job when I’m running around in minimal clothing. 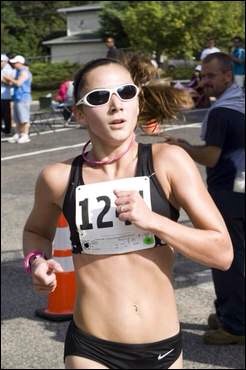 3 thoughts on “Throwback Thursday: The time I won a race and ended up on front page of the local newspaper dressed like this”