On June 26th Phil and I traveled to Frisco Colorado for the second year in a row because we loved it there so much last year. We woke up at 4am that day and it was pitch black because we were in the midst of #poweroutage2015. Since I knew I wouldn’t be able to see I choose to sleep in the clothes I was going to wear to the airport and brushed my teeth by lantern. Then I cooked oatmeal by lantern, said goodbye to the cats, and we grabbed our bags and left.

I dread going to the airport because I don’t like going through security. I was stressed out until we finally got through. The whole thing just gives me anxiety. I don’t like crowds, lines, or feeling confined. I hate having lots of stuff to carry and then having to remove my computer from my bag, take off my jacket and shoes, and show ID all at the same time. I feel like I have stuff everywhere and its a disorganized and uncomfortable mess. Also, TSA workers aren’t always the nicest people but I understand why it is the way it is. They are just doing their job and trying to keep everyone safe but it gives me anxiety and I don’t think that will ever change. Despite feeling anxious, while we were waiting in the security line I got some free entertainment when a TSA agent removed 3 glass bottles of alcohol from someone’s bag.

I fell asleep on the plan within the first few minutes. Flying makes me nervous so I usually try to read or sleep. Our flight was about 4 hours but I slept for most of it.

When we landed we had to navigate through the Denver airport which confuses me more than any math class ever did. They have too many escalators and a train or subway (I don’t know how to describe it) in the airport. Then we had to take a shuttle to the rental car place, that was self explanatory though. When we got the rental car I plugged my dying iPhone into the USB port to charge. I thought it was strange that every single song we heard was a song that I loved but we quickly realized that when I plugged my phone into the USB port the music on my phone began playing through the speakers. I took advantage of this the whole trip because I do not have such a luxury in my 2005 honda civic and I still listen to mixed CDs I made in high school while driving on long trips. This is something I also enjoy but the car playing my music from my phone just fascinated me.

It is about 90 minutes from Denver to Frisco but it goes by quickly because the scenery is beautiful. If New Jersey dropped some mountains alongside its highways I wouldn’t mind driving on them either.

And before we knew it we were in Frisco!!

Immediately, I wanted to eat lunch at The Lost Cajan because they have fantastic spicy gumbo and I love spicy food. We ate there last year and it was so delicious I found myself wanting to eat this gumbo throughout the year. What I like best about this restaurant though is that you can eat outside at picnic tables. It is a very low key and relaxed environment and the staff is super nice. I later found out, from trip advisor, that this is the second best restaurant in all of Frisco.

After we ate lunch we walked up and down main street to see what has changed in the past year and I found American Flag half tights! I have been searching everywhere for these and finally I found them!!

The rest of the day was fairly uneventful. I went for a quick 3 mile run and then we went to the grocery store and ate dinner. After dinner we decided to drive over to Breckenridge and watch Back to the Future in the park. Back to the Future is one of Phil’s favorite movies and I think it was fate that we were visiting at the same time this movie was playing. On our drive over we saw a fox running through the streets and then saw it again as we drove around looking for a place to park. Unfortunately, we didn’t stay for the whole movie because the Colorado mountain towns can get quite cold at night. 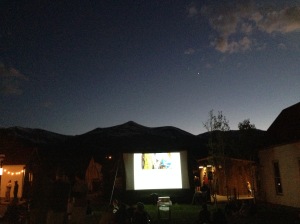 This concluded our first day in Frisco!!

2 thoughts on “Traveling to Frisco”