Brittany and I left at 2:30. She picked me up, because lets be honest, I had no clue what was going on leading up to this race. Last weekend when I tried to sign up for the race I couldn’t remember what it was called and I had to wait for a response to my cry for help on twitter asking what the race was called. I also thought the race was in the morning until I actually did sign up and found out it that it was at night. It took me until I finished the race and drank 2 bottles of water to realize that website I used to sign up is called runbucks because the race was in Bucks County.

I have been in a constant state of oblivion lately. I have too much going on. Two long runs in a row my garmin turned off because I forgot to charge it and I had to borrow Brittany’s watch to finish my long runs. I have been wearing some of the worst clothes to run in because of my hatred for doing laundry, chaffing has been at an all time high. Any race I do is completely spontaneous and I haphazardly sign up for it–except this one. I also have no solid plan for my training. I have discussed my thoughts and ideas regarding my training with a few people I trust but lately I have been enjoying just running without thinking. I have not a clue what is going on but I really do run better when I don’t overthink it. I actually like running 7383093473868376473644 times more when I am scattered and oblivious.

I had no idea that so many people we knew would be at this race but I was happy about that! I also had no idea I was going to be the female winner. I did know that I was going to run a PR because I never ran a 15K before. The plan was to stay around 7:00-7:10 pace for the first half of the race and then run faster if I felt good. For the first few miles Brittany, Meghan, and I stayed together. I felt strong but this was a longer race. I didn’t get excited about it because on hot summer days that can change quickly.

Three women were ahead of us but I didn’t let that bother me. Eventually, two of them fell back and then I caught the third woman around 4 miles. The turn around was a little bit before the 5 mile mark. I know that I picked it up because after the 4th mile I began splitting under 7 minutes. The fifth mile was almost a blur. I suddenly had a burst of energy. I ate some more melted gatorade chews that I had in my sports bra and I began passing the men. When I got to the 10K I waved to some kayakers. Around mile 7 I saw two guys and a girl running ahead of me. I knew they weren’t in the race but I still wanted to catch them because at that point I had become extremely competitive. I am really thankful they were running on the path because it gave me some extra motivation. I caught up to them just before the last mile and they were very encouraging. I could see the lead male. I guessed he was about 100 meters ahead of me and I tried to speed up but then the race ended.

I may not have seemed super excited immediately after the race but I am excited now, and its not because I ran well. Everything about this race just felt right…the people, the course, the environment, running along side the river, the new crop top my mom bought me that morning, the thoughts in my head, the fact that I finally feel like my fitness is returning, and not feeling dehydrated at all.

The awards were amazing. There wasn’t any money but these awards are beautiful. I have never seen anything like them before. They look even more amazing in real life. Oh, and I got that PR! 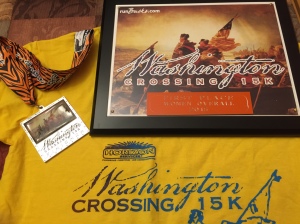 I would absolutely do this race again.

I am swamped with grad school, nothing new there. One of my three summer classes ended. It was my favorite class, gender issues in sports. I thought I would have more time since it ended but somehow I have more work now.

Work is getting extremely busy because the fall semester is about to start.

I still love coffee but I have cut back a lot since it is so hot. I got a new mug and Phil got me pumpkin spice and snickerdoodle creamers. 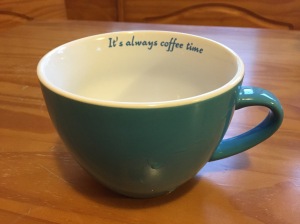 I have been hydrating a lot during runs over 7 miles and eating a lot of gatorade chews on long runs.

Cross country has started. I haven’t been able to go to practice yet but I have met some of the new athletes. I love the fall and cross country season. I can not wait to see how the team does this year. Things are looking good!

After 28 years of functioning on little or no sleep I decided to sleep more and I have been able to wake up and do some morning runs.

I have a lot of things I haven’t blogged about in the past few weeks because I am so inundated with school work. August 30th is the magic day when almost everything is due. August 31st will be an amazing day but until then I probably won’t be much fun or blogging about cats, coffee, or running as much as normal.