The way my cats typically behave when strangers come to the house or when I try to take them to the vet led me to believe that they would be terrible road trip companions, and I was correct for the first few hours of our journey. The day the movers came (1/4) was also the day we left to drive to Colorado. Several days before the movers came we blocked off the cat door that led to the basement (yes, our old house had a cat door!) and moved the cat food and litter upstairs into what was my office. The office was completely empty except for the cat’s things so this became the cat room which added a level of symmetry to our time in the house. When we first moved in that room was also the cat room until we became more settled and the house was cat friendly.

When moving day arrived the cats were locked in that room with a “do not enter” sign so that they wouldn’t be able to escape and hide somewhere. At one point I entered and both cats escaped! The sign was for the movers, but I should not have entered either! We had to ask the movers to go outside so we could catch them. Ninja was climbing on the counter trying to climb the walls and Junior was up in the bedroom trying to hide. Eventually we caught them and returned them to the office. Junior ran right into the carrier and stayed there until it was time to leave! The poor little guy was scared (he doesn’t like boots and all of the movers were walking around in boots making noise) and that was his only option for hiding. Ninja sat in a corner, but he started meowing once the house was almost empty and things quieted down. Of course, he escaped once more before we left but with nothing in the house it was easy to catch him.

When it was time to leave Junior was still in the carrier and I just picked Ninja up and put him in too. I closed the door and Phil put them in the car. 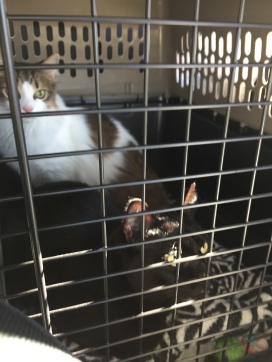 We started driving and before we were out of our town that is a total of 2 square miles a cat (99% sure it was Junior) peed on the blanket. As we left New Jersey and headed toward Pennsylvania both cats were panting and howling and meowing. We immediately thought this was going to be a horrible experience. The further we got from New Jersey the quieter they got, but Ninja hated toll booths so at each toll he would howl. The more expensive the toll the more he seemed to howl!!

The first night in the hotel made us nervous because we had never taken the cats to a hotel before, but they just sat under a chair for most of the night. That hotel room was small and it was pet friendly so hiding spots were limited. This helped us out a great deal and it was easy to catch them for day 2 of our trip.

On the second day we put a small litter box in the carrier incase they needed it, or incase a certain cat had another accident out of fear. They slept in it the majority of the time though. Day 2 was so much better. At the hotel the cats were even more social and willing to explore. 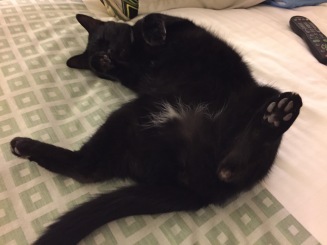 They made themselves as close to right at home as 2 traveling cats could.

Day 3 was rough. We decided to drive straight through and arrive at the new house a day early so the cats were in the car for about 13 hours instead of the 8 hours they were used to.  Overall they handled it well, but there were a few howls along the way. They were afraid to come out of the carrier when we finally arrived at the new house, and we were afraid they wouldn’t be able to find their things so we set them up in the middle of the room. 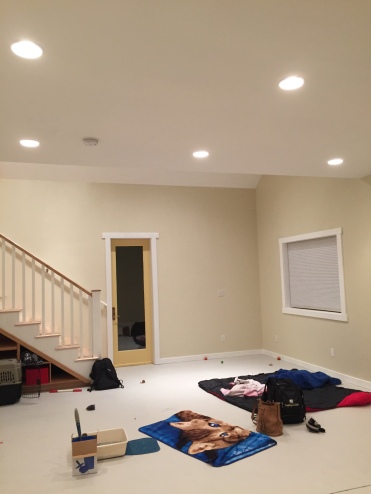 As you can see, we didn’t have much with us and there wasn’t anything familiar or really anything at all. This made the cats stressed so they hid in these cute cubbies.

When we blocked the cubbies off the cats hung out on this balcony. In the middle of the night Ninja was howling on that balcony and sticking his head through the railing (purposely) so I would get up and go get him. He knows how to get attention! He also managed to get up in the cubbies on the kitchen cabinets in the background.

Today (1/13) our stuff arrived and Phil called me on FaceTime so I could talk to the cats. They seem much happier now and they were actually looking around and sniffing everything. I am certain I saw Junior smile as he was sitting on our big fluffy chair!

Now I have mountain cats!

One thought on “Moving the cats to Colorado Part 2: the car ride and the new house”

Hiking at the monument! Our office is cooler than yours! . . . #workretreat #conationalmonument #hikingadventures #hikingcolorado #winteradventures #optoutside #trails #cotrails
Follow The Road Less Run on WordPress.com