Before I moved I ran on the treadmill very often. I lived in a small town that was only 2 square miles and it was located near a university. When I would run by the university I received many unsolicited comments from the male students who believed it was their right to scream sexually explicit things about my body. One time when I got done a very long work day I put my running shoes on and headed out into the darkness for a run. As I neared the end of my run I was followed by a car. The car made every turn I made until I turned down my street, and then it lingered outside of my house as I nervously fiddled with the key to unlock the door. I feared for my life that night and after that incident I refused to run outside in the dark for a really long time. It wasn’t my fault that I had to work until after the sun set. I knew it was my right to run and I wasn’t going to let my life be dictated by the harsh and terrifying actions of the man in the car or the university boys who chose to objectify my body. I decided that I was going to take a safer approach to my training after that night. I wanted to make it to the starting line of my upcoming races without physical or emotional harm, but due to work circumstances I had no choice but to run alone in the dark. This is when I learned to love my treadmill. No one was going to take away my right to run, but I had to feel safe while doing it.

Treadmills usually get a bad wrap. I’ve heard people say things like “real runners don’t run on treadmills” or “why would you run on a treadmill when you could run outside?” I’ve even heard people tell me that the runs I do on the treadmill aren’t quality runs and that these runs will NOT help me in my training goals. These comments are often made by men, usually men who do not run. These are probably the very same men who objectify women and follow then in cars while they run or scream obscenities at them. I don’t let them get to me, I just make sacrifices to protect myself because the world is not the same for women as it is for men.

I’ve run hundreds of miles on my treadmill over the last few years. I’ve also run some respectable race times while utilizing my treadmill as a regular training tool. There is a lot of information about treadmill running on the internet today and a lot of it is positive and informative. There is no shame in running on the treadmill no matter what your reason for choosing to do so is. If I set out for a run and I have an uneasy feeling in the pit of my stomach I will turn around, go home, and run on my treadmill. I rely heavily on my instincts when it comes to everything I do in my life. If my gut says not to do something I don’t do it. I will always fight for women’s rights. I will teach other women to fight for what they believe in. I will teach women to stand up for themselves. I will always stand up for myself. I will always continue to push forward and remain strong despite the obstacles I face as a woman, but I won’t always feel safe while doing it because the world is not a safe place. On the days I don’t feel safe running I choose to run on my treadmill and I am not ashamed to admit that. I love running outside, exploring new places, running new trails, running for miles and miles through the woods, down a path, or around town and feeling free. Running allows me to feel free, but it doesn’t always make me feel safe. My treadmill helps me feel safe when the elements of the world do not. 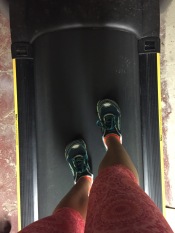