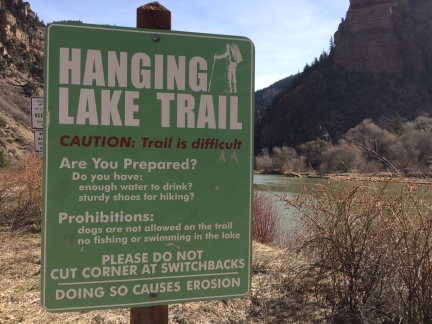 This sign is the at the beginning of a paved path heading toward the trail head. Imagining a difficult trail while you walk along a paved path is difficult, but the sign warned us so we knew this hike was going to be challenging.

Once we got to the trail head we saw tons of rocks. We began climbing up the rocks and then I fell about 400 meters into this hike; I have a few nice bruises to remember that fall.

The rocky part of this hike wasn’t difficult once I figured out how to stay upright, it was the rest of the hike that became difficult. As we got higher up the trail began to have some icy patches and frozen snow. We both slipped a lot because walking on ice is a challenge even if you are prepared. Eventually, I found a walking stick somewhere on the trail and I claimed it as my own. This helped A LOT. 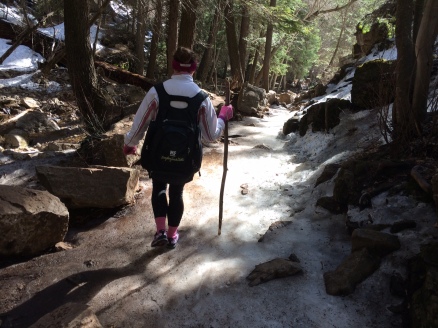 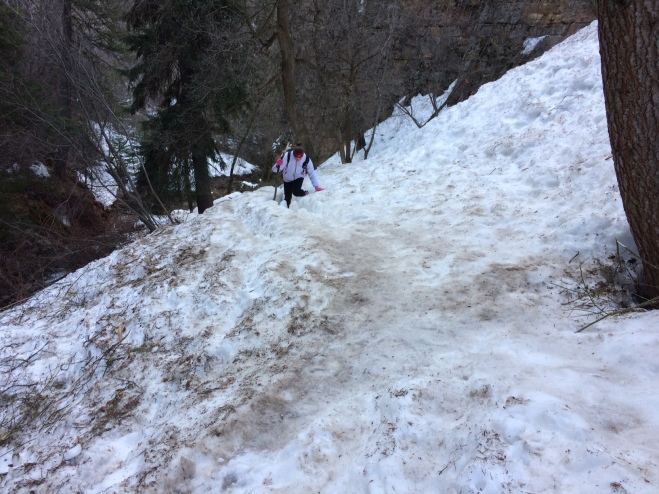 We had to cross a snow covered bridge. The snow was frozen up to the bridge’s railing. I’ll admit I was terrified to walk across this bridge.

Finally, we began to near the top of the trail.

The higher we got the more beautiful the sights became. After climbing up more rocks we were at The Hanging Lake! The water was a beautiful turquoise color and it was unlike anything I have ever seen! 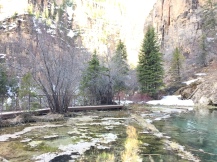 We spent some time marveling at the lake’s beauty and then we began to hike back down the trail. We knew it would be much more difficult going down due to the ice.

On the way down we did a lot of sliding. We probably needed sleds or ice skates to make it back down without falling, but we made it down safely! We also saw a lot of people beginning their hike up the trail as we hiked back down. Some were ill equipped to handle this hike, especially the woman in a dress and sandals. We also saw a bunch of people in flat shoes with no traction, shorts, t-shirts, and without gloves. As we approached the paved path heading back to our car a few people commented on how bundled up we were and how ridiculous it was. They would soon be sorry for making those comments!! For a point of reference, it has been 70 degrees here the last few days. It was not 70 degrees during our hike though. It was very cold. This trail is shaded, snow covered, and the sun barely shines making it is much colder. Plus, the higher you are in elevation the colder it is.

Overall, we really enjoyed our hike and we would do this hike again. The next time we hike Hanging Lake it will be in the summer when the snow melts. Hiking Hanging Lake in March was much more difficult than we had anticipated because of the snow, but the view was totally worth it.

Do you enjoy hiking?

Have you ever hiked on icy, snow covered trails?