On Wednesday, April 12th the Boston adventure began. I woke up before 4 am to go to the airport so I could fly to New Jersey to run the Boston Marathon. This made very little sense to all of the strangers I felt obliged to make awkward small talk with in the airport. I just let them be confused and eventually they all left me alone which is what I wanted…..and I was temporarily confused why I ended up in Utah on my way to New Jersey.  To clear up any leftover confusion, I flew to New Jersey from Colorado to travel to Boston with Rob and Meghan; we were all staying together in Boston.

On the morning of my flight Phil and I decided to empty the dishwasher and we broke a bowl. I’m not a morning person and glass on the floor is never good when you have two curious cats who like to put their paws everywhere! Once Phil cleaned up the glass we were out the door and on our way to the airport. I opted not to fly out of Denver because it is far away and I am not a morning person. Instead we headed westward to Grand Junction. This was the tiniest airport I’ve ever been to and I had high hopes that I’d get through the security line without TSA stopping me for something ridiculous. My high hopes came crashing down when they stopped me because my empty water bottle looked sharp. After about 10 minutes they returned my backpack and I went to wait for a plane to Utah. I was really confused why I was going to Utah until I figured out that the Grand Junction airport doesn’t fly directly to New Jersey. The flight to Utah was only about 45 minutes long and the view from the plane was beautiful. I’m glad I got to see the moon and the sun over these snow covered mesas as we were landing. 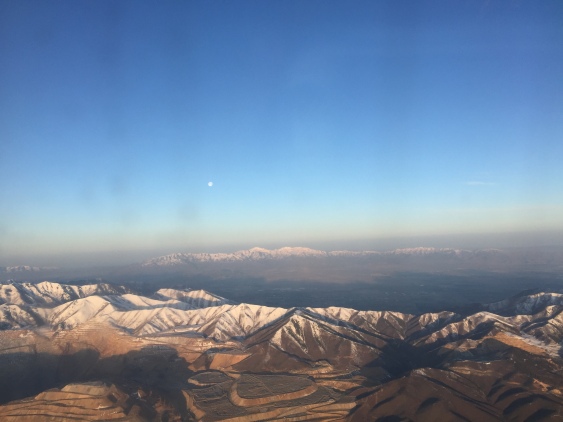 In Utah I had 2 hours of waiting before I could board the next plane. I tried to get some school work done and this helped to pass the time. Before I knew it I was on my way to New Jersey. I was thrilled that I had a window seat and that no one was sitting next to me! I was even more thrilled that I was flying with Delta and I could catch up on episodes of The Big Bang Theory. I actually stopped watching this show on TV so I have something to watch when I fly. I should have continued to do work but I didn’t. When the plane landed in Newark I immediately knew that I was back in New Jersey because I was shoved and pushed at least 5 times while I was trying to retrieve my duffle bag from the overhead bin. Now that I live in the midwest I am starting to believe the stereotype that everyone in the northeast is always in a hurry!

I had never been to the Newark airport before. This was my first new experience of the trip. I made my way outside without getting lost and then I found Rob. I had also never been to the town where Rob & Meghan live before so this was my second new experience. The northern part of New Jersey will forever be foreign to me. When Meghan got home we all ran in the park and went to a diner. After that I spent the rest of the night doing the work I didn’t do on the plane.

I must have been really tired on Thursday because I slept for a really long time. Rob and Meghan’s guest room has a really comfortable bed. If I ever sleep there again I need to put my phone across the room to ensure that I wake up. Aside from the comfortable bed, there are many other perks to staying with Rob and Meghan. You don’t have to do dishes, you get to learn about history, you can always talk about running, and they live near a Chipotle.

On Friday we left for Boston!!! Our drive to Boston was trafficy, but the music was good. It was as if my iPod was plugged into the car. I also fell asleep for a while so the ride didn’t seem as long (to me) as it actually was. When we arrived in Boston we entered our Real World apartment for the very first time. Knowing about the show ‘The Real World’ is one of the few pop-culture things I know about.

The apartment was tiny and cute and I liked it! Once we brought all of our stuff in we went running through Boston. We ran 7 miles over some bridges and around a river. There were a lot of people outside taking pictures. I wonder how many photo shoots we ran through…..but I am not going to search the internet to find out. After we ran we went to a pizza place that falsely advertised having buffalo fries. I’ve never had buffalo fries before and I was hoping I’d no longer be able to say that I’ve never had them. The pizza place did not have buffalo fries that night. If I remembered the name of this pizza place they’d be tied with Dunkin Donuts on my grudge list. Friday night was also the night I discovered how good honey sandwiches are when Rob pulled bread out of thin air like magic.  FYI: Honey sandwiches taste like cake. 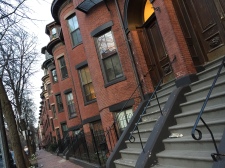 (random photos from around Boston)

On Saturday I woke up and walked over to the Prudential center to work for Sparkly Soul at the race expo. We had so many awesome new products for The Boston Marathon. 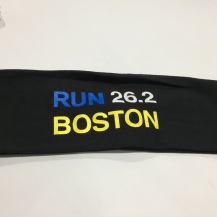 The expo was crazy! It was so much bigger and busier than any expo I’ve ever worked at before. It was incredibly difficult to navigate through the two showrooms and up to the third floor to pick up my race number because there were so many people. Getting my number wasn’t as challenging as I had anticipated. My Colorado address and New Jersey drivers license didn’t cause any issues. I didn’t even have to pull out the email from the BAA saying it was okay that my information didn’t match! On my way back to the Sparkly Soul booth I bought a Boston Marathon coffee mug to celebrate this small victory. Because I’m superstitious, I didn’t use this mug until after the marathon.

*spoiler alert: there is coffee in the mug, I finished the marathon* 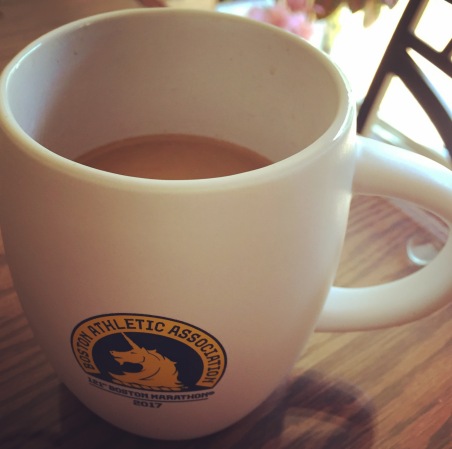 Working at the expo was great. I was able to meet several people I know from the internet in real life, and it kept my mind off of running the marathon. Right before the expo ended I saw my friend and teammate from high school, Amanda! This was a nice surprise! The only downside to the expo was the free beer booth. The free beer line wrapped all around our booth and it made me really aggravated because I hate the smell of beer and I hate being crowded by impatient people waiting in lines.

When the expo ended I began walking back to the apartment and I found $40 blowing across the street in my direction!!! I felt really guilty about taking it and I asked a few people if they dropped anything. Everyone said no and then a couple, who saw me pick up the money, told me to keep it, so I did. That night the occupancy of our apartment doubled and someone said it was like The Real World. We now had 6 people staying in a 2 bedroom apartment.

On Sunday it seemed like we all woke up around the same time. Surprisingly, no one was in anyone else’s way. If we were actually on The Real World I’m sure someone would have been in someone else’s way. If we really were on The Real World there also may have been some bickering, but we are all too polite to actually simulate The Real World. I liked our version much better than MTV’s. I left shortly after we woke up to go work at the expo again. It wasn’t as busy on Sunday because it was Easter, but the beer line was still really long. I left the expo with a few sparkly soul headbands and a new hair bow. The Real World apartment had pasta for dinner that night and we were all in bed early because the next day was Marathon Monday!

3 thoughts on “The Boston Marathon Part 1: traveling to New Jersey, The Real World apartment, selling Sparkly Soul Headbands, and everything else that has nothing to do with actually running the marathon”