Hello internet! Today this blog is officially 3 years old and I have 331 posts floating around on the internet from the last 3 years of my life. I’m amazed by this and thankful that I started blogging. So much has happened in these 3 years and I love knowing that I will forever have a way to look back on my life and reflect. 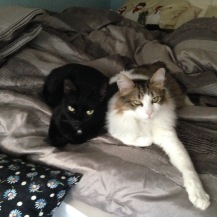 So, what happened over the last 3 years?

September 2014: This was the beginning of my 3rd season coaching. I also wrote a post talking about my visual problems and my running. In September of 2014 I was running with a large track club in New Jersey and competing regularly. I was running some pretty decent times.

October 2014: October 4, 2014 was the exact day that I began graduate school. I wrote a personal post about why I ultimately made the decision to study sport psychology. And then, at the end of October 2014 my foot got all cut up in a race because I wore a pair of spikes I bought for $8 online and my toenail  got infected and eventually fell off. Surprisingly this blog post is one of my most popular and it is gross! I’ll never understand why this is.

December 2014: This month was a disaster. I was so sick and had to skip running at club xc nationals because I spent a night in the emergency room with a severe migraine. I had numbness in my hands a feet for days and my head was pounding. I don’t recall ever having a bout of migraines that lasted this long. Prior to this I was probably in the second best running shape of my life.

February 2015: I just complained a lot about everything.

March 2015: I published my first poem on The Road Less Run.

April 2015: I earned my USATF coaching certification and I decided I was going to write a thesis.

May 2015: May 2015 was the first time I worked for Sparkly Soul at a race expo. That same day was also the day that I haphazardly signed up for my first marathon and then I kept it a secret for a really long time because I thought that would be fun. I also ran a race later that month and I ran so fast they didn’t have me on the results….or something like that! Well, the race director left me off the results and gave my prize to the 2nd place woman.

June 2015: A weekend with The Road Less Run was released!

July 2015: We vacationed in Frisco, Colorado and drove out to Colorado Springs where I bought my dream box. Inside the dream box I wrote that I wanted to move to Colorado. *foreshadowing*

September 2015: I decided to tell everyone that I was training for a marathon.

October 2015: I started running for New Jersey’s Pacers Princeton team with a group of women I loved being teammates with! I ran 20 miles at a pretty fast pace mid October and then I lost interest in training for the marathon so I just stopped running a lot. I also wrote this article about the leaves being too many colors to count.

November 2015: Staycation! I actually ran the marathon and qualified for Boston. I had no idea what Boston qualifying time was until I had finished the race and read all of the text messages telling me I’d qualified.

December 2015: I chopped off my hair and I got into the Altra ambassador program!

January 2016: I began 2016 by accidentally looking at the start time of a race wrong and missing it. I stopped working full time because I had too much work to do for graduate school. I still worked part time and then spent more time working on my thesis.

February 2016: I don’t think I was very interesting this month.

March 2016: I shared my typical daily thoughts, these haven’t changed much.

April 2016: I tried to run a 5k on the track and it got canceled because of snow. I know, SNOW WAY! I got my first few Sole Athletic lace tags!

May 2016: I wrote this letter to my former athletes which I can never ever bring myself to read because it makes me so sad.

June 2016: I ran a race with Liz and got my favorite purple t-shirt. I love this shirt. I also developed mindful miles.

July 2016: In July 2016 I flew to California for my graduate program and I spent the next 2 months there. Oh, and I caught a foul ball!

September 2016: Year 5 of coaching began. Running was going terribly due to low iron and issues with compartment syndrome. I was not looking forward to running another marathon.

October 2016: I think I was boring during this month.

November 2016: Phil got offered a job in Colorado, we put our house up for sale, and I ran another marathon. Then, we got an offer on our house right after I finished the marathon.

December 2016: We packed up our house during Christmas because we were going to move in January.

January 2017: This was the month we actually moved to Colorado with both cats riding in the back of the car. I had to fly back to New Jersey to live with my parents for the next 2 months while I finished my 2nd internship for graduate school.

February 2017: I was still in New Jersey and Phil and the cats were in Colorado. At the end of February Lyndsey and I drove out to Colorado because I was finally moving permanently. YES, I drove from NJ to Co 2x.

March 2017: Lyndsey and I arrived in Colorado on March 1st and we ran on snow covered trails. A few days later she left and I’ve been sad ever since.

June 2017: I finally got a job! I started my 3rd internship, I started GOALden Peak Performance, and I started a running club here in my town. June was eventful.

July 2017: In July I turned 30 and then my life came full circle when I was able to speak at a high school XC camp.