Next month my friend Jessica and I are running a REVEL half marathon at Mt. Charleston in Las Vegas. We haven’t raced together since high school cross-country in 2003. Yes, its been a really long time. I’ve been dreaming of the day Jessica wanted to run a race again and I ONLY signed up for this race because that dream very recently came true. I am not mentally prepared to race a half marathon right now nor do I think I will be within the next month, but I am not injured anymore and I am going to do it only because I will have one of my best friends right next to me.

I signed up for this race in January when I had just barely begun training again after an achilles injury and hoped for the best. Thankfully, I am nearing the end of March and training is steadily improving. Currently I am 90% sure I’ll make it from the start to the finish of this race next month.

Sometime in February I found out that Phil was going to Las Vegas for a work conference, serendipity at its finest! Of course I decided to tag along so that I could see Jessica.

After I told her I was coming to visit in March we decided it would be a great idea to drive up to Mt. Charleston and preview the race course. We theorized that running the course would help us know what to expect on race day, we’d know how we’d feel after running a half marathon downhill (this race is net downhill), and I would feel confident that I could still run 13 miles after barely running from August to the end of December.

I was super sore and down on myself the whole drive from Colorado to Las Vegas because I had been analyzing and nit picking what I could have done differently in the race I ran earlier. The entire drive was that way except for when we stopped at the Black Bear Diner in Utah. The whole time we were at the diner I wanted to take a Black Bear Diner cup. I loved this cup but my moral compass wouldn’t allow me to drink the water and stuff the cup in my purse. If anyone knows how I can honestly acquire one of these cups please send me an email!

As we crossed over the Nevada state line I realized that I could actually drive to Jessica’s house. I can’t even remember the last time I was able to drive to her house because she lives in Las Vegas and I was living in New Jersey up until a year ago.

The moment I saw the Las Vegas city lights on the horizon I reminded myself that running is so much more than a mentally challenging race or recovering from an annoying injury and I let those thoughts escape me. Running is about the relationships we build, the people we meet, the struggles we endure, and the obstacles we overcome. Running is about the people we choose to take with us from start to finish because, let’s be honest, we can run away from people, lose them along the way, or leave them behind.

Phil and I arrived in Las Vegas pretty late. Everyone was sleepy except for me. I was just too excited to be there. Jessica and I planned on running the course with one of her friends the following day, we finalized our plans, and went to bed.

The next morning we got ready to go run the course. Jessica’s friend met us at her house and we began our journey to the start of the race course. This is where the story gets interesting! We parked at the finish and got a ride to the start. As we were being driven to the start, following the directions they looked up, the elevation kept getting higher and higher until we were over 7k feet. Elevation excites me and this became my main focus as we rode up the mountain. The drive seemed really long. Someone mentioned that it seemed longer than 13 miles but no one really investigated. We got dropped off at the start and began running down the course.

I don’t live in Las Vegas so I had no clue where we were running or what the course was like. All I did was click the sign up link, pay the money, and crash my husband’s business trip so I could hang out with my friend. I had just learned that the race had a 6am start time a few days before this run and I was outraged! One could conclude that my attention to detail was severely lacking throughout this whole experience.

Anyway, the three of us began running down Mt. Charleston having a great time. We were telling stories, admiring scenery, picking out the best places to run on race day, and I ate chocolate flavored GU and immediately regretted not eating chocolate flavored GU sooner. The miles were flying by, and then it happened. They realized and mentioned that around mile 8 we should have made a turn–we never saw a turn. I was just cluelessly running down the road while the two of them discussed the possibility that we were actually running the marathon course. This was quickly confirmed when they looked at a map. 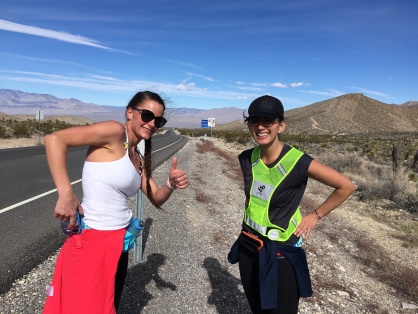 But then, reality set in. We had to figure out how to get back to the car. We opted to keep running for another mile toward a non-existent police station to ask for help. That police station never appeared. After 14 miles we stopped running. We just couldn’t run anymore. Resources were getting scarce. We had no water, no chocolate flavored GU, and phones were quickly dying. Since we wouldn’t run a full marathon with her Jessica took off her shoes and began walking down the road in socks because she had blisters. She was complaining about my complaining and we were all so delirious that we were laughing. Eventually I gave her my shoes, put on her uncomfortable shoes, and asked the only person around for help/directions. 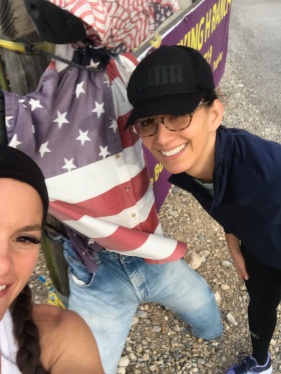 Because hitchhiking didn’t seem safe, we called someone to pick us up. We ended up walking several more miles while we waited for our ride.

This humorous error is why I’m only 90% sure that I’ll finish the race! Because my cluelessness is part of the reason we got into this mess, I went on the race website and gathered enough facts to hopefully get us from start to finish together even if one of us gets lost, left behind, or off course. Like I said, running isn’t always about the race it’s about the people we choose to take with us from start to finish.