In January I signed up to to run the REVEL Mt. Charleston 1/2 marathon with my friend, Jessica. Back in March I went to Las Vegas and we attempted to preview the course but we accidentally started at the marathon start and we were 13 miles away from the finish after we ran the 1/2 marathon distance. That was an adventure, but this time we were going to get it right!

So many things had to happen for Jessica and I to wake up at 2:30AM the morning of this race and make our way to the start and subsequently the finish. One of those things was my move to Colorado, another was her return to the sport of running, and of course us learning the course and the logistics of the race was another contributing factor.

I met Jessica in the fall of 2001 when I was a freshman in high school. My first memory of her is from a hot summer day when our cross-country team did a hilly 4 mile run on a country road. She leapt out of her mother’s car, an old volkswagen beetle kind of car, wearing a bright yellow sports bra and sprinted away. She was very serious and very focused. It’s funny how some memories stick with you so vividly, and other memories are just lost forever. As I chased her down the road in the summer heat I had a gut feeling that we’d become friends, and we did. As the season progressed Jessica showed me how to power up hills, she told me not to settle in races, not to hold back, and she lied to me when she said side stitches would go away if you ran faster. If only she knew after a very long hiatus from her running career that I’d be running right next to her acting so cheerful [and annoying] during miles 9-13 of a 1/2 marathon she may not have been so quick to teach how to run a race!

I arrived in Las Vegas on Friday April 27th sometime in the afternoon after driving from my house in Colorado to the airport in Grand Junction, burning my mouth on hot coffee, spilling the coffee all over my car, and having my hair searched by airport security because it is just a monstrosity. Oh, and then I got invited to a bachelor party as I was waiting to board the plane. The bachelor party was also flying to Las Vegas and they were obnoxious the entire flight. Thank goodness it was a short flight. When the plane landed I walked as quickly as I could to get away from the bachelor party. I ended up exiting the airport an obscure way and Jessica couldn’t find me. Eventually, she found me in what I am calling the VIP pickup area because there were lots of limos and SUVs with tinted windows picking people up. I did not see any celebrities though.

At the expo we visited the Altra booth and Jessica finally broke down and bought a pair of Altra running shoes! That was the highlight of the expo. I’ve worked at a lot of race expos and this one was just really small and I wasn’t impressed. Had she not bought the Altra running shoes the whole thing would have been lame. That night we attended a nice dinner with the girls on Jessica’s running team. The thing that stands out to me the most from that evening was the amazing apple dip desert. I seriously wish I had that recipe. Going to bed was more like taking a 4 hour nap since we had to wake up so early. I struggled to fall asleep so I watched Gilmore Girls until I eventually did fall asleep. And then, it was 2:30 in the morning. I was furious that I had to be awake!! I went downstairs and ate chips and salsa for breakfast with coffee. Jessica braided her hair and my hair and then we rushed out the door.

When we got to the race we had to take a shuttle up the mountain to the start. It was so early and I was cold. I’m not a morning person and I complained a lot.

I cheered up when we were approaching the starting area and about to actually run the race. It felt surreal that we were going to be racing together again after such a long time. I also forgot what time it was once we started running. We ended up starting way in the back and got stuck weaving between people to pass them from the start to the finish. It was particularly annoying during the first few miles. The race was also only happening on the right side of the road so the course was very narrow and crowded and we were both getting annoyed. At one point early on I told Jessica I’d complain about the narrow race course on my blog. Consider the previous statement a formal complaint! Looking back I truly think we may not have been so annoyed with the narrow course if we had started further up and we weren’t fighting through a crowd of people and passing people the whole way. The race start seemed very casual. We just made our way to the timing strip at the start and ran. It felt like we just casually woke up before the sun to go for a run and then said, “oh wow there is a timing strip here let’s step on that and run really fast.”

The first 8 miles were great. Jessica thought we were running to fast. I told her she was wrong. We watched the sun rise–it was blinding, we kept passing people, and our orange shorts were a hit, in my mind anyway.

After mile 8 we turned and that’s when things got tough. Those last 4 miles were filled with some complaining and it wasn’t me complaining about being awake so early……..

The day before Jessica asked me what time I thought she could run and I said 1:45, 8min mile pace. I love when I am right about things so there was no way I was going to let her slow down those last 4 miles. At mile 10 I told her she had just run a 10 mile PR, by a lot. Then she put her headphones in and stopped listening to me cheerfully run right next to her…..

The last 3 miles of the race felt like they flew by [for me] because I was SO EXCITED that my friend was going to run a huge 1/2 marathon PR. She wasn’t exactly listening to all of the encouraging things I was saying as we ran those last few miles but that’s okay because we stayed right on pace, and with ~400 meters to go she took off sprinting toward the finish line. We finished together in 1:44:01. I may not have been exactly right with my predicted finish time but I am giving myself a 59 second buffer and counting that as win! And, it was a huge PR for Jessica. She ran 14 minutes faster than her pervious 1/2 marathon and that is AMAZING!! 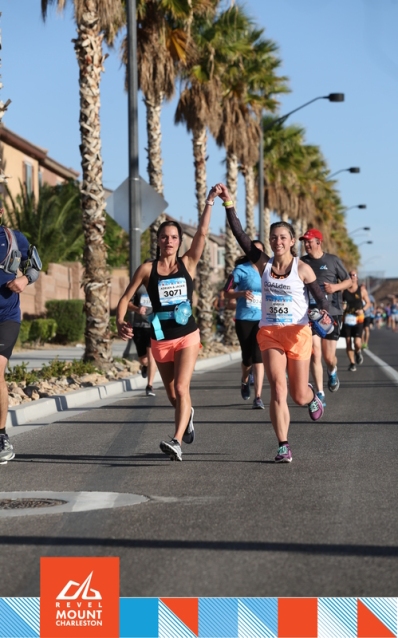 Like I said before, running is about the relationships we build, the people we meet, the struggles we endure, and the obstacles we overcome. Running is about the people we choose to take with us from start to finish. There are very few people I’d wake up at 2:30AM to run a race with, and even fewer people I’d choose to run side by side with the whole way. I’ll never forget this race, this day, or the overwhelming amount of joy I experienced when we crossed the finish line [59 seconds faster than predicted]. I always trust my gut feelings, and even at 14 years old my gut feeling was spot on because I gained a lifelong friend through running.