Race recaps have been scare this year. It’s difficult to write about things that aren’t enjoyable, which has been the case for a lot of the races I’ve run this year. Now that I am done with all of the races I’d planned to run, aside from Marathon 2 Marathon, I have finally been able to take some time and reflect upon the race season. I ran 9 total races this year. I’ve written about two of them early on in the race season. First I wrote a post called 40 seconds faster, but never good enough. That post took a lot out of me in a very liberating way. I wrote about the Sequoia Glen 5k and the Grand River Gallop, the first and second races I ran this year. Then, I stopped recapping races because I didn’t know how I felt about the races I was running. Sometimes you can simply go through the motions but have no emotion. Sometimes you show up to the event in physical form but your mind is somewhere else. Other times you have so many emotions that you can barely speak without crying. In short, this was my race season. As I wrote a few days ago, I have been feeling disconnected because I haven’t been writing. Now that I am feeling more connected to my thoughts and emotions I can finally process the rest of my race season.

In late April I ran the Water Wells for Africa 5k. I was the first woman to finish and I placed second overall behind Phil. My time was 22:42, or something close to that. Winning wasn’t fun, I was really displeased about my time and I felt defeated, especially since the effort I was exerting didn’t match the result. I was pushing so hard the whole race but I felt like I was standing still. Some days running hard is challenging, and this is why we do speed workouts…..I hadn’t done any speed workouts and I knew this was why I felt miserable for the third race this season. I was disappointed in myself. This race was unique because a large contingent of the participants were our close friends. If it wasn’t such a supportive environment I probably would have expressed that disappointment. Instead, I silently and secretly kept that inside and embraced the excitement and support of my friends and community. Winning races was always my goal when I was younger but it is rarely my gaol now. Recently, my race goals are time based and if I happen to win that is just a bonus. I cannot control who shows up to races, the fitness levels of other athletes, the skillset of other athletes, or how competitive my competitors are. I can only control my own training, my own fitness, and how competitive I choose to be at each event. I was not in control of any of those things during this race or the two preceding races and that was the painful reality I had to accept. I was running with no purpose.

In May I ran the Silt Hobble 5k. I love this race because you get a cool t-shirt with an old man hobbling. The t-shirt was such a hit last year that Phil even came to do this race with me solely for the hilarious t-shirt. Interestingly enough, I only ran about 20 seconds faster at this race 22:25 or something like that but I wasn’t upset with the result. The course was much more challenging than the Water Wells race–lots of hills. Both races were equally 1/10th of a mile long. In this race I felt more competitive, I felt like I was able to push, and I was extrinsically motivated by the prospect of winning money if I placed top three. I finished as the second woman and then found out that what the race director meant to say was that only the top three overall finishers would receive money, meaning only the men. The men in our local running community are incredible and took a stand explaining that this wasn’t fair and then they split their winnings with the women. That was even cooler than the t-shirt with the hobbling old man. 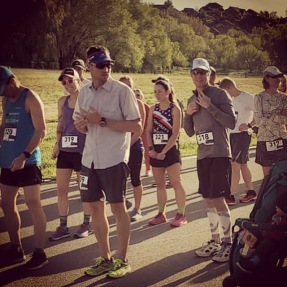 In early June I ran the Run/Walk For Their Lives 5k to support the wildlife foundation. I think I also placed second in this race with a time of 22:47 but I honestly don’t remember. Overall, I didn’t feel great running that day. I wasn’t having a great week. Mentally I was struggling, probably more than anyone around me realized. The race wasn’t an important race, it wasn’t significant to me in any way but I really wish I wasn’t feeling defeated before I even stood on the starting line. The race was hilly and even though I felt prepared to run the hills because all I had been doing for months was running hills, these hills crushed me. 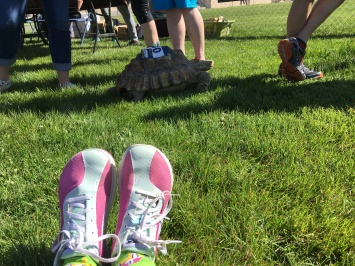 In late June I ran the Strawberry Shortcut 10k in 45:46. I was the third woman to finish and I won $50. My time was right where I expected it to be for a 10k on no real training. It was a freezing cold, wintery, June morning with a mix of rain and clouds. I HATE winter after Christmas is over, and I especially HATE winter when it is cold in June! I was anticipating a nice summer morning but instead I was wearing gloves and it was raining. If being cold and wet wasn’t enough, I am now missing one of those gloves. It’s a pink glove with a pocket on top. If anyone locally has seen that in the street somewhere please let me know. I don’t trust that this hot weather will stick around much longer and I am going to need that glove. Perhaps if I didn’t have to keep track of gloves in June I wouldn’t have lost one!!!

In July I ran the Hogback Hustle 5k for the third year in a row. I was the first woman to finish and I ran a course PR of 20:56. This was the very first race this year where I felt like there might be hope for my running goals. A few weeks before this race I started officially training for the marathon. Asking Rob to coach me for the marathon freed up my mind from the chaos of coaching myself. Now all I have to do is run. It was very simple and very easy for me to go outside every day and train. This race is one of my favorites because I live on the race course and I love knowing every detail of the course. I’ve even devised the perfect strategy for running the course, but it’s a secret I don’t often share. I am always mentally prepared for this race and that makes a huge difference. It makes sense that I was feeling calmer and more confident going into this race than any of the others. After the first mile [uphill] I knew I was on pace to run a course PR and that only boosted my confidence more. Winning the race wasn’t exactly my goal, the course PR was, but it felt good to win a race and actually be proud of it–that wasn’t my experience a few months before.