Last Thursday and Friday Lyndsey and I worked at the Sparkly Soul booth at the Hot Chocolate 5K/15K expo. I’ve also been writing this post for almost a week if that is any indication of how my life has been lately…..insane.

See, here we are!

If you have been reading my blog for a while you probably know that I have worked at the Sparkly Soul booth a few times during Philadelphia race expos, the last time being in November before I ran the Philadelphia Marathon. This is something that I love doing and I have been looking forward to doing it again for months! When the ladies at Sparkly Soul asked me if I had a friend who could help out I immediately asked Lyndsey! I would say that we had fun but that would be a huge understatement. We L❤️VE selling sparkly souls! ✨

Lately, my life has been weird. I keep finding myself in peculiar situations and I can’t even complain about them because honestly, my life the past few weeks has been comical. When Lyndsey showed up at my house on Thursday morning around 7:30am we were both full of energy and the 3,000 things we needed to tell each other just started coming out. We were talking non-stop and this was before I actually had coffee. I put the creamer in my 20 ounce travel mug, insisted that she hang her bag over the door in my office so Ninja (my cat) wouldn’t chew through the straps, grabbed the suitcase with the sparkly souls, got in my car and drove to the train station.

Taking the train from South Jersey to Philadelphia is a bargain in comparison to paying for parking. This is also the only way that I know how to function when I get into the city. For the most part the drive to the train station and actually being on the train was uneventful. The real adventure began when we got off the Patco line at 8th & Market and I had to attempt to wheel my suitcase up flights of stairs. Then, the Gallery Mall entrance from the Patco station was closed. The one thing I know about Philadelphia is that you can get off the Patco at 8th & Market and walk through the Gallery Mall to the convention center. I love to brag about how I can get to the convention center without even going outside but this time the city took that away from me and left my understanding of its inter-workings up to instinct and street smarts. I have a terrible sense of directional instinct and my street smarts less than desirable.

I had absolutely no idea what to do and we had walked around the train station a few times before we decided that we had to go outside and walk to the convention center. This involved wheeling the suitcase up stairs to the street, a real struggle. The walk to the convention center left me wheeling the suitcase around construction while Lyndsey used her phone to help us navigate. This is what I call modern day street smarts.

When we made it to the convention center the next question was how do we get to the hall where the Hot Chocolate expo was. We figured that out too after asking for some help from a convention center employee. We made it there around 9 o’clock and I told the guards that we were from Sparkly Soul and needed to set up our booth instead of simply saying that we were vendors. Lesson learned. The key word for admittance to the expo before it begins is vendor.We also walked by a wall of coffee mugs that I wanted to take a picture of but never actually did.

Once we got into the expo we began setting up our booth. In my completely biased opinion our booth was the prettiest booth at this expo. I mean who doesn’t love looking at all of the colorful sparkly soul headbands!!? I spent most of the time we were setting up admiring them. 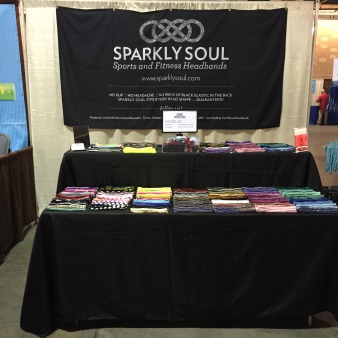 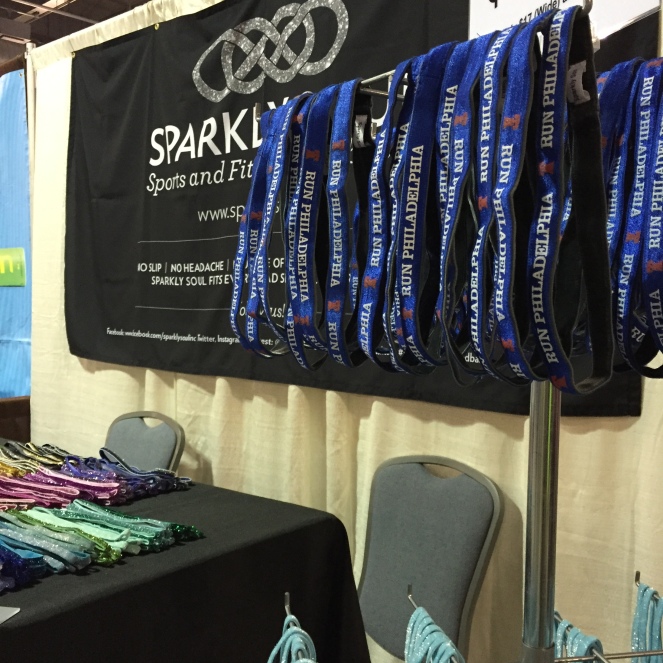 The best sellers seemed to be the charcoal, Run Philadelphia, teal, and star wars themed headbands. We sold a few aurora borealis blue headbands, which is one of my favorites and we met so many sparkly soul enthusiasts. The best part about working at expos is meeting lots of other runners.

We went for a run around my town and Lyndsey fell and cut her knees open. Moments before it happened we were discussing the time she fell and cut her knees open while she was doing a long run in the fall. Without even worrying about the blood she just got up and kept running until we hit 7 miles and we were back at my house. I then gave her the tiniest bandaids in the world because that is all that I had. I blame shop rite for rearranging everything in the store and making it impossible to find decent band aids….or anything else.

The rest of the night was spent waiting until midnight so that I could be one of the first 500 people to sign up for the Philadelphia Marathon. The first 500 people save $20. While I waited I did laundry, washed dishes, filled out some forms for graduate school, did 30 consecutive pushups and a core workout, and watched Gilmore Girls. I was very tired but I’ll do anything to save money so I stayed awake until I had officially signed up for the marathon.

Getting to the expo on Friday was a lot easier since we knew the route we had to take. We had some extra time so we walked a few blocks to the nearest Wawa. Friday was a lot busier than Thursday and we sold a lot more headbands, which excited me! We watched a lot of little kids walk by the booth and grab the rainbow sparkly soul. They just love that one! The rest of the day was awesome and the woman at the Lara Bar booth gave us a box of 250 apple pie flavored Lara Bars as the expo was wrapping up. We love Lara Bars so we graciously took them!

After we packed up our booth we headed out of the expo hall. I had the suitcase and Lyndsey had the Lara Bars. We looked outside and it was pouring. The weather people said it may rain but since it was April Fools Day I took that comment lightly. Thankfully, we were smart enough to walk through the convention center as far as we could before exiting to the street, at which point it had stopped raining.

On our way down the steps to the train a guy offered to carry my bag but I just lifted it up, quickly walked down the steps, and said “I am stronger than I look!” This is another testimony to my newly acquired street smarts. I’m smart enough not to let a stranger carry my belongings!

After we took the train back to New Jersey we decided to run. Lyndsey and I were both tired, slightly dilerious, and we had taken to finding the humor in everything. While we were running it began to rain and then lightening. We don’t like lightening. Our run started off like this: first mile 8:17, let’s not run too far from my house. Second mile 7:47, were going to get struck by lightening, third mile 7:08, we are going to die let’s run faster!!!!

The lightening run concluded our sparkly adventure because I fell asleep immediately after eating dinner and getting a quick shower, which took less than an hour.

3 thoughts on “A sparkly adventure”