I signed up to run the Boston Marathon this past September after unknowingly qualifying at the Philadelphia Marathon in November of 2015. I wasn’t trying to qualify for Boston, it just happened. I wasn’t planning to run any more marathons after I ran the first one, now I’ve run three. The marathon distance is still new to me and it still terrifies me. It terrifies me because I know that I can run a smarter race, a faster race, a stronger race, and I know that I have been shortchanging myself since the very first day I decided to run a marathon. All three times I’ve signed up for marathons I’ve lost motivation to train and by the time I got to the starting line of each marathon my heart hasn’t been in it. I’ve now run two more marathons than I ever thought I would because each time I cross the finish line I become frustrated that I didn’t run faster. I’m sure I’m not the only person who always feels like they can run faster.

If I did not qualify for Boston at my first marathon I can honestly say I never would have run another marathon, qualifying for Boston changed everything. Rob and Meghan encouraged me to run Boston, if they hadn’t I probably wouldn’t have and I never would have gone back to Philadelphia a second time. I don’t exactly remember why I ran the Philadelphia Marathon again in 2016, but I’m sure I had my reasons at the time and I’m certain I wouldn’t have if I wasn’t planning to run Boston in 2017.

My heart was into marathon training this time until I found out I was moving. My training wasn’t spectacular but I had a plan and I was trying to follow it. In November I was excited, motivated, and confident and then it all fell apart. I’m not a runner who uses running to reduce stress, I’m a runner who just doesn’t run when I am experiencing stress. I prefer not to be alone with my thoughts in these situations and running puts me in a situation where I am often alone. This fall and winter I needed people to run with more than ever because I had a lot going on and I was really stressed. I am very thankful to the few people who recognized this and stepped up to help me run enough to get through the Philadelphia Marathon, and continued to run with me while I was dealing with a move.

As many of you know, we sold our house and moved from New Jersey to Colorado in January. I spent the next 2 months living with my parents while I finished an internship before I made my second road trip from NJ to CO. Selling a home, moving, and being separated from Phil was challenging and at some point training for Boston became less important to me than everything else. When I finally got to Colorado on March 1st I felt better about running, I just didn’t really feel excited about Boston the way most people were. I felt like I didn’t deserve to go to Boston because it had never been a goal for me like it is for so many other people. I felt that I had qualified and didn’t appreciate it while many other runners work so hard to qualify and often fall short. I felt frustrated that running had become secondary to everything else in my life. I felt like a jerk because I didn’t work as hard as I should have to qualify and I knew I didn’t train adequately leading up to the race. When I qualified for Boston for the 3rd time last week I felt like an even bigger jerk for having done so with minimal training again. Maybe none of these thoughts are justified, but maybe they are. Maybe I am really really really really upset with myself for reasons that I struggle to explain. Maybe, I just know I can do better and I am tired of settling.

All of these thoughts were rolling through my head on Marathon Monday. After we woke up, ate breakfast, and walked over to the buses that would take us to the athlete village I had a difficult time understanding how I had even gotten there. Not how I got to the athlete village, but how I had gotten to the point in my life and my running where I am undertrained, emotionally drained, and about to run the Boston Marathon. It was overwhelming. As I wandered around the athlete village I felt lost and out of place, and not because I had been separated from my group. I didn’t share the same excitement with the runners surrounding me. Sure I was excited to be there in that moment, I just didn’t connect with the race like everyone else seemed to. Running Boston was exciting for me because I viewed it as connecting the past with the future and overcoming all of the obstacles in between. In the 6 months since I entered this race my entire life has changed. My commitment to this race was the only thing that remained consistent. I viewed making it to the athlete village and into my corral as a triumph because I could have easily bailed out. I finally began to feel excited the morning of the race because I was surrounded by so much positive energy. I understood why so many people strive to qualify for Boston, being there feels magical. I knew one way or another I’d finish the race just because of the energy I felt around me.

I had been warned about the downhill start to this marathon so I was very cautious as I crossed over the timing mat to start the race. I was running in the 7:50s for the first 3 miles even though it felt much slower. I’ve never done a race this large before and the crowd was unbelievable! Running the Boston marathon is like attending a party in the street. The first 3 miles came with a lot of pushing and shoving, mostly accidental, and a girl updating her snapchat story. Somewhere around mile 4 I heard Meghan call my name and I turned around and saw her holding her sandwich! I also bumped into a young girl and befriended her for the next 10 miles. It was really nice to have someone to run with and chat with as I realized how hot and miserable the race was becoming. I did my best to start drinking water and gatorade early on so I wouldn’t feel horrible toward the end of the race. By mile 8 I was already running out of water in my handheld and grabbing water and gatorade at all of the stops. At one of the water stops I lost track of my new friend and I had to continue running the next 12-13 miles alone. Luckily, I remembered her bib number and I was later able to find out that she finished!

Mile 16 was my fastest mile. I ran 7:28. After mile 16 everything fell apart. I was sore, I was hot, I was STARVING, I was tired, I was extremely thirsty, and I could feel my clothes chaffing my skin because of all of the water I spilled and the sprinklers I had run through. I kept telling myself that if I got to mile 20 everything would be better. I slowed down a lot after mile 16 and just focused on getting to mile 20. At this point I wanted to requalify incase I wanted to come back again in 2018, so that became my goal. I wish I had realized that I had already requalified for Boston, but this goal kept me going. I remember seeing so many people stop dead in their tracks or hobble to the side of the road and I just didn’t want to do that. When I finally got to mile 20 I felt worse, not better. Around mile 20 you begin the hilliest part of the race. The hills weren’t as bad as I had anticipated, I was just really really thirsty and I was starting to feel my body breaking down. I made sure I was eating chews and drinking at every water stop, it just wasn’t enough. Marathon Monday was much hotter than I would have guessed. I packed a snow hat and gloves in my bag. Mile 21 was my slowest mile. I ran 9:46. It wasn’t the hills that got me though, it was the fact that I was so thirsty and so hungry. I ate breakfast about 4 hours before I started running. After mile 21 I consistently ran around 8:30 pace all the way to the finish. At this point I was absolutely certain that I was not going to run a PR. I always knew I wasn’t going to run a PR, but early on I was running faster than a PR pace. With 5.2 miles to go I wanted to be done running as quickly as possible so I ran as fast as I could. With 3.2 miles to go I realized that my quads were very sore from all of the downhills. With 1.2 miles to go I was even more thirsty and my stomach hurt. When I saw the finish line it seemed so far away, and then before I knew it I was crossing over the finish line. I ran 3:33:00.

As I hobbled around the finishing area a woman put a medal around my neck, I was wrapped in a heat blanket, and given water and a gatorade. I drank the water very quickly and then moved on to the gatorade only to discover that it wasn’t actually gatorade. It was some kind of strange chocolatey protein gatorade that wasn’t meant to be guzzled when you aren’t feeling super great. I kept it though and drank the rest later.

After I retrieved my gear I checked my phone and I had 77 messages, some of which I probably still haven’t responded to. Sorry. I tried to use the phone as a map to find our apartment because I got lost in the street, but I was so tired I couldn’t figure out how to do that. I asked a nice cop for help and even though I’m terrible with directions and I was exhausted he managed to direct me back to the Real World apartment. The walk to the apartment felt very long. I had to make my way through a bunch of crowds, road closures, and groups of college students who kept congratulating me as they cut me off. Not one of them realized that it isn’t polite to cut in front of people who’ve just run a marathon. There was a lot of stumbling happening in Boston that afternoon. Upon returning to the apartment I realized I had sunburn. It suddenly made sense why everyone was putting on sunblock at the start.

As soon as I got back to the apartment I was frustrated with myself. I couldn’t stop thinking about how much better I would have done if I had adequately trained. I was upset that I wasn’t emotionally invested in the race. I was just there going through the motions while other people were living out their dream. Thoughts like this consumed me for the rest of the night and they are still cluttering my head over a week later. I have nothing bad to say about Boston. It was an unforgettable experience and I’m glad I did it, it just wasn’t my best race. If the circumstances were right I’d go back to Boston one day. For now though, I can’t fully commit to anymore marathons until I am more settled in Colorado and I have regained consistency in my life after moving. 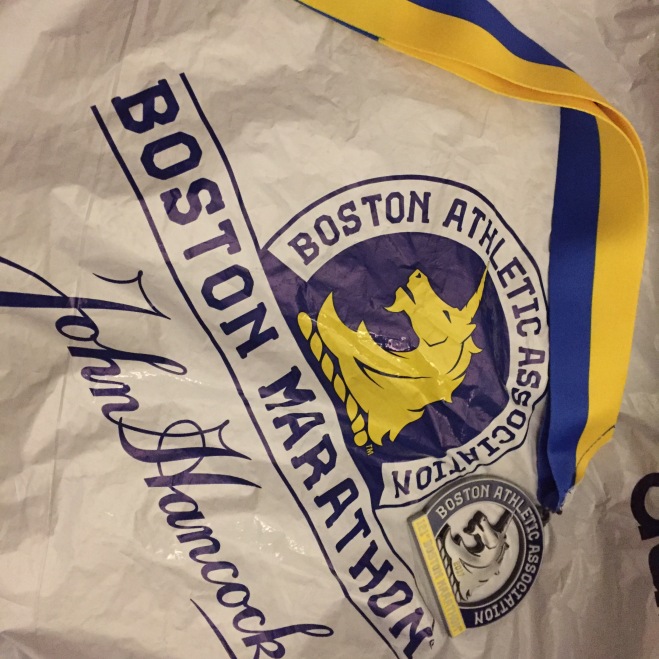 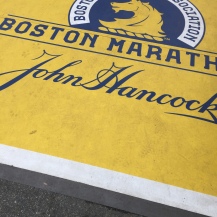 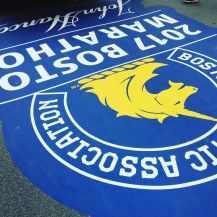 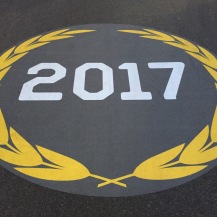 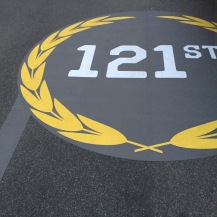 One thought on “The Boston Marathon Part 2: Running the marathon and all of the thoughts I had before, during, and after the race”